How to Pronounce Gal Gadot’s Name with an Israeli Accent

Hey everyone, it's Hadar. Thank you so much for joining me. Today I'm going to teach you how to pronounce the name Gal Gadot.

This is why a lot of English speakers say ‘Gal' [with an American accent] instead of ‘Gal' [with an israeli accent], or sometimes they might say ‘Gaal'. So the ‘g' sound is the same. Great, check. And then we have the ‘uh' sound in Hebrew. ‘uh', very simple. Actually, it's closer to the ‘uh' as in ‘cup' in American English, ‘uh'.

Then the last name is Gadot. Gadot. The beginning is very much the same as in Gal – ‘Ga-‘, ‘Ga-‘. Gadot. Check. You already know how to pronounce that. The second syllable is ‘dot', ‘dot'. While in American English, there is no pure O sound – there is either ‘ow' as in ‘go' or ‘aa' as in ‘honest' – ‘ow' – ‘aa'. This is why most people pronounce it as ‘Gadowt'. But in Hebrew it's a pure O, O. So it's kind of like the beginning of ‘ow', but then you stop right after the beginning. It's also super short – ‘Gadot'.

In Hebrew there are only five vowels – a, e, i, o, u – in comparison to English that has between 16 to 18 vowels, depending on the dialect. So, this is why we want to reduce it. There's a lot less jaw movement, everything is super chill and relaxed. Gal Gadot. Gal Gadot. It's kind of like we don't want you to read our lips when we speak. Gal Gadot.

Now, let me share with you why I absolutely love Gal Gadot. And it's not just because she's a rock star and she's like one of the biggest movie stars ever, and she's also Israeli, and she is very much herself, she's so charming and her personality always shines through; but not because of that. I love her because of her English journey.

Because what is so unique to her is that she never tried to hide the fact that she's a non-native speaker and she never used it to stop her from achieving her goals, and for showing up fully like herself – authentically and genuinely. And whenever she faced a struggle – and I've seen many interviews where she said something wrong, or people didn't understand her – and instead of feeling self-conscious about it, she simply laughed it out. She said, “Oh no, it's my English”, or “No, that's not how I pronounce it” or something like that. And she stepped into her power and she said to herself, “This is not going to stop me.”

“You guys got to be really great friends on this, right?”

And even though I'm sure that inside herself she might have thought, “Oh, you know, I should know better by now, or this, or that, and what are people going to think?”, she never let it stop her, which I think is so incredibly important.

Because as speaker of a second language, there's always going to be a struggle, and there's always going to be something. The question is, are you letting it stop you on your way to your success? And I can tell you that she absolutely did not. And when she did face a struggle, she simply made it her own and she let it go easily or actually made fun of it, which is always, always, you know, it's such a beautiful gift – to be able to laugh at yourself, and not to make a big deal, and not to take it personally.

So that's it. Practice the pronunciation of the name, or – you don't have to – you can also work on your Israeli accent. DM me, if you want more information about how to speak with an Israeli accent. You can find me at @hadar.accentsway on Instagram. And in the meantime, I hope you enjoyed it. It was a little different than what I usually do, but I think it was fun, at least for me.

Thank you so much for watching. And I'll see you next week in the next video. Bye. 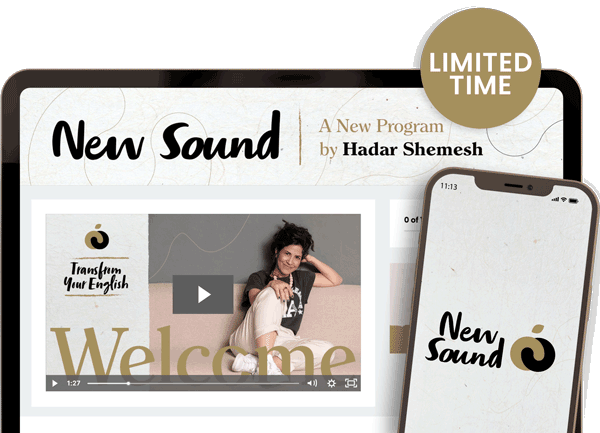